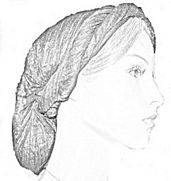 Where Modesty Does Not Mean Frumpy!

Aleinu leshabeach la-adon hakol, lateit gedulah leyotzeir bereishit, shelo asanu kegoyei ha-aratzot, velo samanu kemishp'chot ha-adamah, shelo sam chelkeinu kahem, vegoraleinu kechal hamonam
It is our duty to praise the Master of all, to ascribe greatness to the Molder of primeval creation, for He has not made us like the nations of the lands and has not emplaced us like the families of the earth; for He has not assigned our portion like theirs nor our lot like all their multitudes.

V'anachnu kor'im u-mishtachavim u-modim, lifnei melech malchei ham'lachim Hakadosh baruch hu
But we bend our knees, bow, and acknowledge our thanks before the King Who reigns over kings, the Holy One, Blessed is He.

Hu Elokeinu ein od. Emet malkeinu, efes zulato, kakatuv betorato: Veyadata ha-yom, vaha-sheivota el levavecha, ki Hashem hu ha-Elokim ba-shamayim mima-al, ve-al ha-eretz mitachat, ein od
He is our G-d and there is none other. True is our King, thre is nothing beside Him, as it is written in His Torah: 'You are to know this day and take to your heart that Hashem is the only G-d--in heaven above and on the earth below--there is none other. (Devarim 4:39)

Al kein nekave lecha Hashem Elokeinu lirot meheira betiferet uzecha, leha-avir gilulim min ha-eretz, veha-elilim karot yikareitun, letakein olam, bemalchut Shakai
Therefore we put our hope in You, Hashem our G-d, that we may soon see Your mighty splendor, to remove detestable idolatry from the earth, and false g-ds will be utterly cut off, to perfect the universe through the Almighty's sovereignty.

The prayer Aleinu, proclaiming G-d as Melech (King) over a united humanity, has been recited as the closing prayer of the three daily services every since the 13th century. According to tradition, Yehoshua composed it at the time he crossed the Yarden (Jordan) and entered the Land of Promise. It is generally held, however, that it was first introduced into the daily prayer service by Rav, founder of the Sura Academy (early third century), as an introduction to Malchuyot, the section recited as part of the Musaf service for Rosh Hashanah.

Bach (Orach Chayim 133) explains that Aleinu was added to the daily prayers to implant faith in the Oneness of G-d's Kingship, and the conviction that He will one day remove detestable idolatry from the earth..., thus preventing Jews from being tempted to follow the beliefs and lifestyles of the nations among whom they dwell (see Iyun Tefillah and Emek Brachah).

As we can surmise from its authorship and its placement at the conclusion of every service, its significance is profound. Its first paragraph (aleinu) proclaims the difference between Yisrael's concept of G-d and that of the other nations. The second paragraph (al kein) expresses our confidence that all humanity will eventually recognize His sovereignty and declare its obedience to His commandments. It should be clear, however, that this does not imply a belief or even a hope that they will convert to Judaism. Rather, they will accept Him as the only G-d and obey the universal Noachide laws that are incumbent upon all nations (R' Hirsch). (Artscroll Siddur, Nusach Ashkenaz, p. 158-159)

Since the 14th century, incessant attacks were concentrated upon Aleinu on account of the words "For they bow to vanity and emptiness and pray to a g-d which helps not." So, this passage was deleted from the Ashkenazic Siddurim (Prayer books).

While most congregations have not returned this passage to the Aleinu prayer, some prominent authorities, among them Rabbi Yehoshua Leib Diskin, insist that Aleinu be recited in its original form (World of Prayer; Siach Yitzchak) (Artscroll Siddur, Nusach Ashkenaz, p. 159)